Director of Communications Altun: This youth, who will build the Century of Türkiye, shall continue to turn our nation’s century-old dreams into reality

Director of Communications Altun: This youth, who will build the Century of Türkiye, shall continue to turn our nation’s century-old dreams into reality

Presidency's Director of Communications Fahrettin Altun, in his speech at the opening of the "Figures Inspiring the Youth" event held in the conference hall of the Directorate, stated that the state has largely completed the infrastructure necessary for raising young people to the highest levels in every field, from education to technology, from arts to sports.

Stating that they held the sixth meeting of the "Figures Inspiring the Youth" project today, Director of Communications Altun recalled that in this context, they have so far brought together respected and successful figures in their fields with young people in various cities of Türkiye.

Indicating that they wish to enable young people to benefit from these success stories and vast experiences, Director of Communications Altun said that today, eminent figures, who are a source of inspiration with their unique experiences and achievements in science and sports, which left their marks at the national and international level, would take part in the event.

Noting that Ali Fuad Başgil said in his book "Together With Young," "The light you get from the right idea illuminates your path throughout your life," Director of Communications Altun said, "I hope that these events we organise will also be a light that will illuminate the path of our young people. I wish them many successes they shall achieve through their willpower, honesty, ideas, and efforts."

Pointing out that young people are often referred to as "the future" or "tomorrow", Director of Communications Altun said:

"This is partially true. Even so, it does not reflect the whole truth. Youth cannot be viewed as a "potential on the shelf," reserved only for tomorrow or the future. Young people are at the present moment with all of their potential, energies, dreams, accumulations, and existence. Therefore, I do not believe it is acceptable to imprison the youth in the future while excluding them from the present. Young people are a part of the present, and they cannot be discussed solely as a component of the future. Youth and people of all generations, together, weave the present and the future in this very moment. President Recep Tayyip Erdoğan likewise views the present as the "time of youth" and refers to himself as a "guest of the time of youth." Young people's lives are unavoidably influenced by the accomplishments and failures of previous generations. With this understanding, our biggest aspiration is to leave our young people a great and strong Türkiye and to build a great and strong Türkiye with our young people. In this sense, we are exerting our utmost effort to make the present and future of our youth better and more prosperous."

"We will continue to train our youth for the future"

Underlining that the Century of Türkiye, which President Erdoğan proposed with a great vision, was especially the "century of young people," Director of Communications Altun stated, "This approach is a clear and unequivocal indication of the importance he places on youth and the elevated status he accords them."

Asserting that the state has largely completed the infrastructure necessary for raising young people to the highest levels in every field, from education to technology, from arts to sports. as stated by President Erdoğan, Director of Communications Altun said:

"On this foundation, we will continue to train our youth for today and the future with the awareness that 'the future rooted in the past' as individuals who are dedicated to their values, know what they want, broad-minded, resolute, well-equipped, hardworking. We will continue to support them in their efforts to undertake good and qualified work for humanity. Dear young brothers and sisters, your excitement, energy, and passion are this society's greatest strength and guarantee. Your aspirations and expectations will continue to help us strive harder and provide more services and projects for our country and nation. Our President is a leader who has always trusted young people and has always opened up greater space and opportunities for them."

Director of Communications Altun recalled that President Erdoğan led the way in lowering the voting age to 25 and later to 18 with this faith in young people, and pointed out that this paved the way for young people's participation in the political realm.

Director of Communications Altun reminded the youth of the "anti-youth" rhetoric used by those who resisted taking these actions at that time.

Noting that radical movements in Türkiye's political life, particularly leftist ideologies, deem young people as an ideological prop, a material to be used and discarded, Director of Communications Altun recalled how such deception-based attempts turned young people against one another, notably in the 1970s, inflicting great suffering.

Stating that over the past two decades, they have fought against the efforts to create artificial ideological polarisation among young people, Director of Communications said:

"We believe that the way to strengthen social peace and security is through the free participation of young people in the political arena. We have made substantial progress over the past several years in this regard. With its young and dynamic population, Türkiye continues to be a world leader in every field one can think of, including economy, diplomacy, technology, science, art, and sports. On this route, we view each of our young people as the building blocks of the great and powerful Türkiye’s epic written by our country. Undoubtedly, this epic is being written and will continue to be written by our youth. Our country, which has become a regional and global actor as a stabilising power and is reinforcing its own stability, is attaining achievements that will set an example for the rest of the world. It is crucial that the youth of this country have the awareness and self-confidence of being citizens of a great and powerful nation. Simply ignore how Türkiye’s opponents portray it. Türkiye has experienced revolutionary transformations in the last twenty years and thus stepped into a new age. Today Türkiye is a reputable regional power and an effective global player. Today, our youth achieve greater success in every field, from arts to sports and science to technology. And when these young people act with awareness and self-confidence, they will achieve even greater success."

"We have lighthouses that illuminate the way"

Director of Communications Altun emphasised that the government has recently elevated and improved its investments in the arts, sports, and infrastructure more than ever before in the Republic's history and added, "I believe that this youth, which will construct the Century of Türkiye, will continue to make our nation's ambitions a reality, one by one. In this light, it is our responsibility to offer our youth the chance to enhance their competencies and skills, as well as the assistance that will allow them to continue to flourish."

Director of Communications Altun stated that the youth, who are supported by the government in all fields, have not let anyone down, and that young athletes have risen to the top of international competitions, especially in disciplines where we formerly had a limited presence.

Director of Communications Fahrettin Altun said that young Turkish scientists have earned a reputation for themselves with global success, adding:

"Sharing the adventures and experiences of the role models is, of course, vital for ensuring the continuance of these successes. We believe that the experiences offered by our distinguished scientists and athletes will inspire and motivate our youth. They have demonstrated and continue to demonstrate through their own lives, successes, and experiences that it is possible to achieve these goals with effort, despite the hardship. What I would like to stress is that only people who find a way, who lead the way, and who march fearlessly can inspire and give courage. Thanks be to Allah, from Sultan Alparslan to Ghazi Mustafa Kemal Atatürk to Mevlana and Haji Bektash Veli, we have national, moral, historical, and cultural figures that inspire us and all of humanity, as well as lighthouses that illuminate the way."

"I believe that youth will transform our nation for the better"

Director of Communications Altun highlighted that "inspiring figures alive" still exist just as they did in the past and added, "Our President Recep Tayyip Erdoğan is a leader who inspires and encourages the youth of our nation and the rest of the world. The leadership of our President, who is devoted to serving his country, overcomes all types of challenges at home and abroad, declares, "The world is bigger than five", and strives for a fairer world, is an invaluable source of inspiration for us and the youth.

Director of Communications expressed his belief that the youth's zeal and enthusiasm, together with the experience of inspiring figures, will enable them to make greater contributions to the nation and transform it for the better and continued:

"I believe that the success and life stories we will hear will inspire you, provide you with courage and hope, and illuminate your path. I am confident that you will undertake breakthrough projects in science, arts, sports, innovation, and technology. You will considerably enhance the trust and experience you inherited. When our youth embrace our national, moral, historical, and cultural values, i.e., the values that make us who we are, their success will have a deeper significance.

I hope that the number of individuals who inspire our youth with their stances on national issues and outstanding characters, as well as their success in their respective fields, will increase. No hurdle will be insurmountable so long as you continue to strive with your mind, beliefs, manners, conscience, experience, hard effort, and honesty. I am fairly confident that you will also serve as a source of inspiration."

Director of Communications Altun wished the event to be fruitful and auspicious while expressing his pleasure at being able to interact with young people in this event.

After delivering his speech, Director of Communications Altun chatted with the young and wrote, "Youth are prepared for the Century of Türkiye" on the digital board labelled "Leave your imprint." 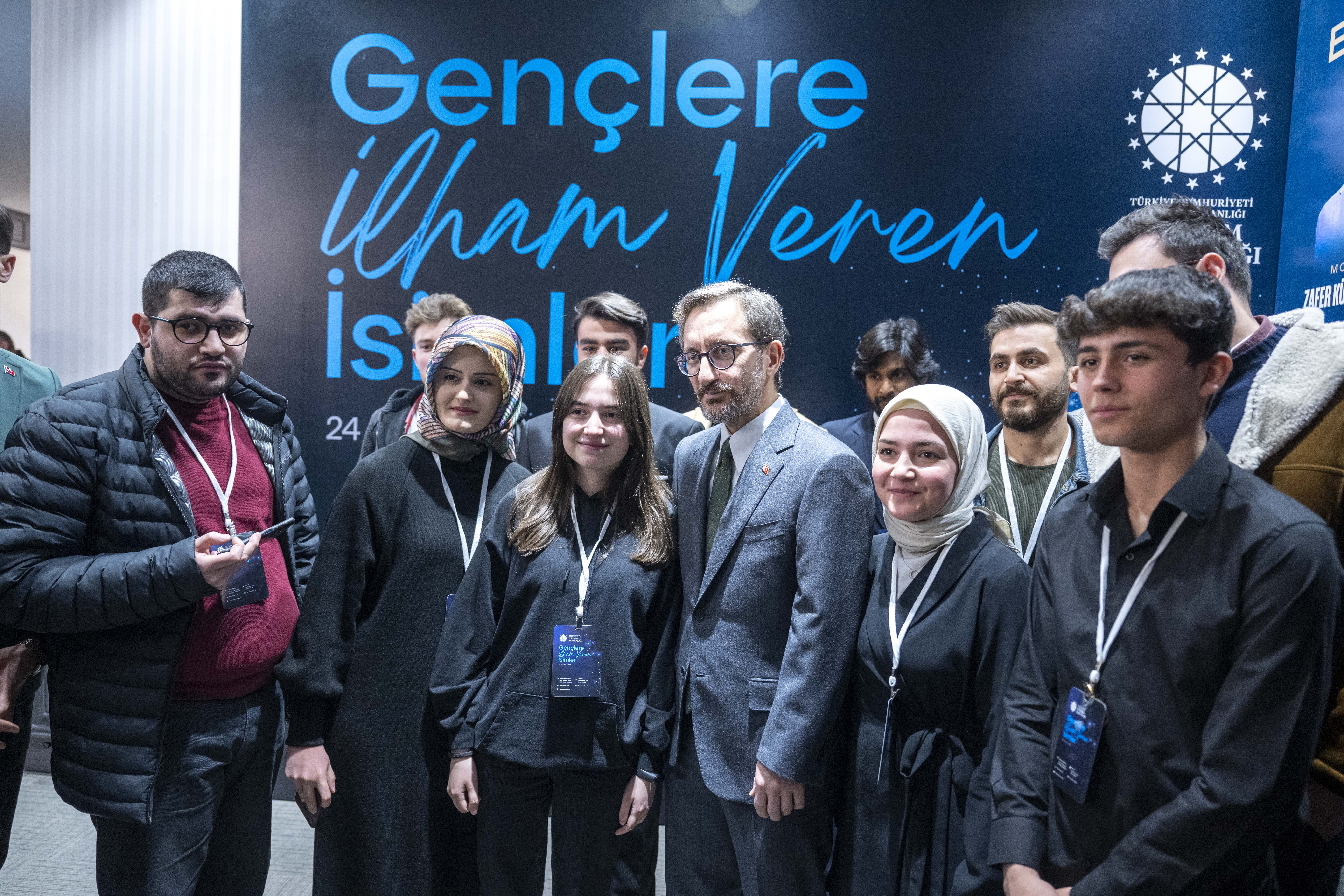 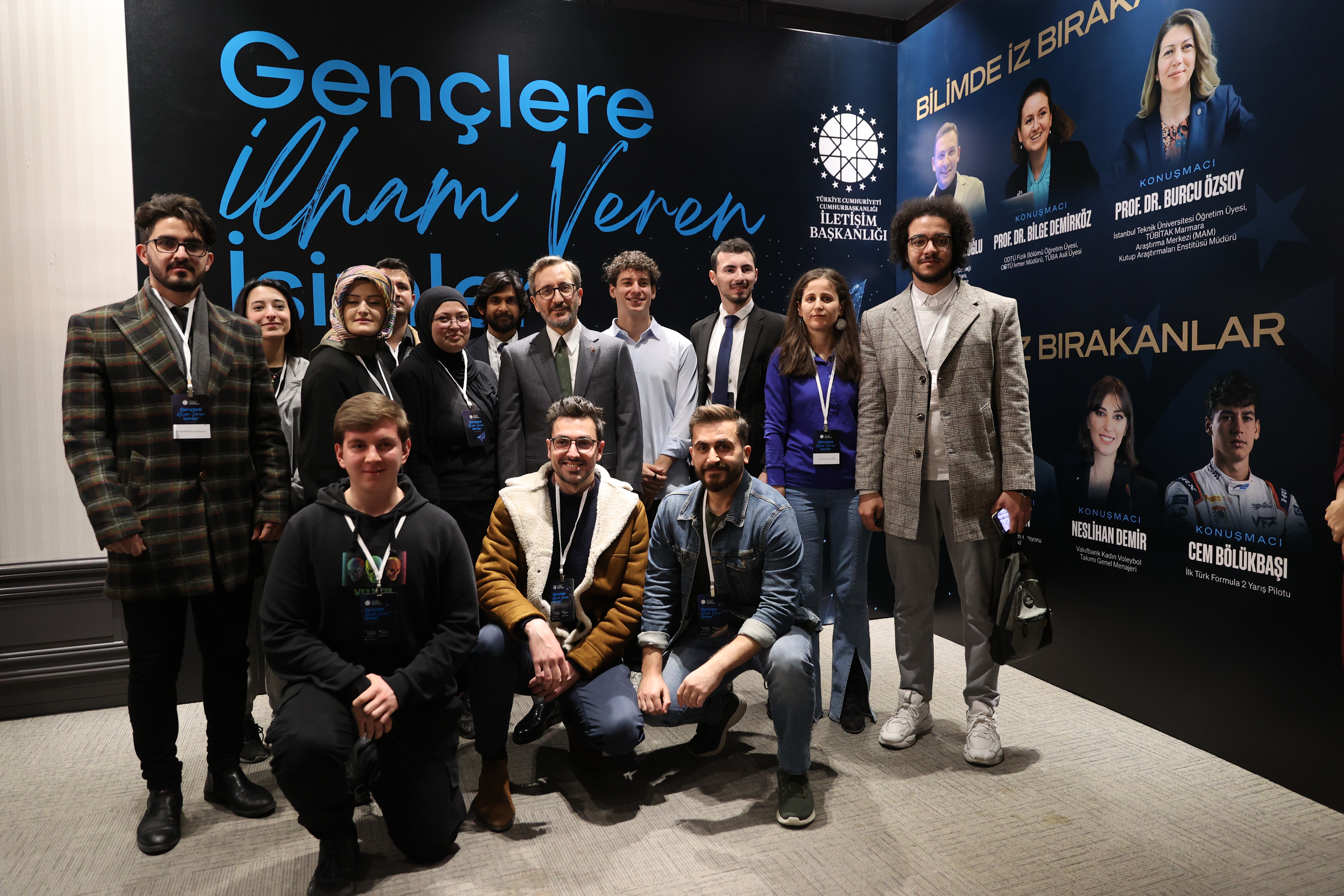 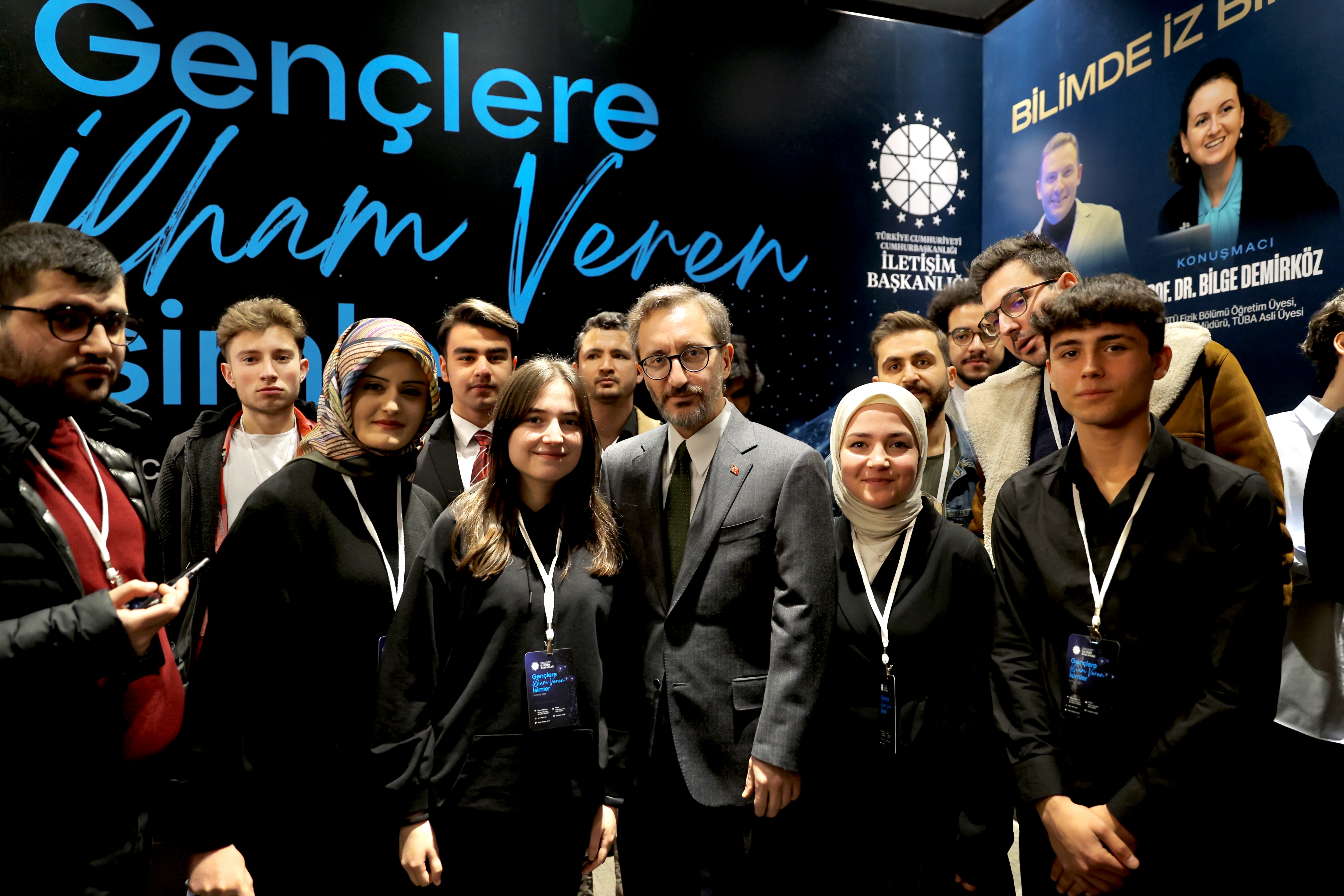