Article penned by President Erdoğan for the newspaper Yangi O’zbekiston

Article penned by President Erdoğan for the newspaper Yangi O’zbekiston

In his article titled "Türkiye-Uzbekistan: Eternal Friendship and Cooperation Founded on the Law of Brotherhood," which was published in Uzbekistan in the newspaper Yangi O'zbekiston (New Uzbekistan), President Recep Tayyip Erdoğan stated, " We regard deepening our relations with brotherly Uzbekistan in every field, as a responsibility placed on our shoulders by our special ties and history, rather than a choice, during this period, when Türkiye handled its relations with the ancient continent with a more comprehensive approach under the slogan "Asia Anew" in the "Asian Century."

President Erdoğan stated that Türkiye-Uzbekistan relations, which we define today as a "strategic partnership founded on the law of brotherhood," take root in an environment of mutual trust in all fields.

Stating that they celebrated the 30th anniversary of the establishment of diplomatic relations between the two countries on March 4, 2022, President Erdoğan said, "We are proud to have been the first state to recognise Uzbekistan's independence, which gained its own state and flag after a long struggle on August 31, 1991. When Türkiye opened the first Embassy in Tashkent, the building that had previously served as the Ministry of Foreign Affairs during the Soviet Union period was given to the Turkish Embassy, which we regard as a symbol of Uzbekistan's privileged view of Türkiye."

President Erdoğan stated that Uzbekistan, the homeland of our ancestors, has made a significant contribution to the development of trade and cultural interaction by assuming guardianship of the historical Silk Road and possesses a rich political, economic, and cultural accumulation that emerged from the geography of Turkestan and guided the world civilisation. President Erdoğan emphasised that the works of great scholars and scientists such as Imam al-Bukhari, Ulugh Beg, al-Khwarizmi, al-Biruni, Ahmad Yasawi, and Ali-Shir Nava'i, who contributed significantly not only to Turkish-Islamic civilisation but also to humanity's shared cultural treasure, are the common heritage that binds us together.

Emphasising that Uzbekistan is a country capable of playing an important role in its region and beyond, with its deep historical background and state tradition, a young and dynamic population of more than 34 million, which accounts for roughly half of the Central Asian population, its geo-strategic location in the heart of Asia, its rich natural resources and fertile lands, President Erdoğan noted:

"Uzbekistan's reform policies, which are reflected via the concepts of 'New Uzbekistan' and 'Third Renaissance,' and which are pursued under the astute leadership of my dear brother President Shavkat Mirziyoyev, are admired not just in Uzbekistan but also across Central Asia. We appreciate their pioneering role in alleviating humanitarian suffering in Afghanistan. We support the city of Termez to be a logistical hub for all other international organisations, including the UN, in providing humanitarian aid to Afghanistan. I would like to highlight that we attach importance to the notion of connectivity, which Uzbekistan has brought forward within the context of the prosperity and stability circle that it wants to establish in Central Asia and beyond."

President Erdoğan pointed out that the ties, which reached the level of "strategic partnership" following the visit of Uzbekistan President Mirziyoyev to Türkiye in 2017, were crowned with the High-Level Strategic Cooperation Council Meeting in 2020.

Emphasising that he believes the Second Meeting of the High-Level Strategic Cooperation Council, scheduled for March 29-30, 2022, as part of his official visit to Uzbekistan, will be instrumental in furthering the ties between the two brotherly countries, President Erdoğan said that as part of the meeting, they will discuss the political, economic, military and social dimensions of bilateral cooperation on a variety of issues ranging from energy to agriculture, industry to culture, and youth to the environment and that they will further strengthen the contractual basis of relations through bilateral agreements they will sign.

Pointing out that Uzbekistan is experiencing a "resurgence period", President Erdoğan stated the following:

"We encourage our citizens to visit the country, invest in it, and endeavour to strengthen our relations with it in all areas. The projects signed by our enterprising business people in Uzbekistan are not only a source of pride for us, but they also serve as the driving force behind our bilateral trade. Indeed, the steps taken rapidly in the political field since 2017 have also been reflected in the fields of trade and investments in a short time. We are taking firm steps towards our five-billion-dollar trade goal. Ending the year 2020, when the adverse effects of the global pandemic were felt most severely, with positive growth, the two nations' trade volume topped 3.6 billion dollars in 2021. Additionally, the fact that import and export statistics are so close to one another demonstrates that our trade relationships are mutually beneficial and supportive. I am convinced that new milestones in bilateral trade will be reached in 2022.

We regard deepening our relations with brotherly Uzbekistan in every field, as a responsibility placed on our shoulders by our special ties and history, rather than a choice, during this period, when Türkiye handled its relations with the ancient continent with a more comprehensive approach under the slogan "Asia Anew" in the "Asian Century." We believe that our joint efforts to establish a better future with brotherly Uzbekistan will benefit all of humanity. Hoping that our cooperation, which has deepened on the basis of mutual respect and trust, will continue to grow at the same pace, I extend my most heartfelt greetings and affection to our Uzbek brothers and sisters on behalf of my nation." 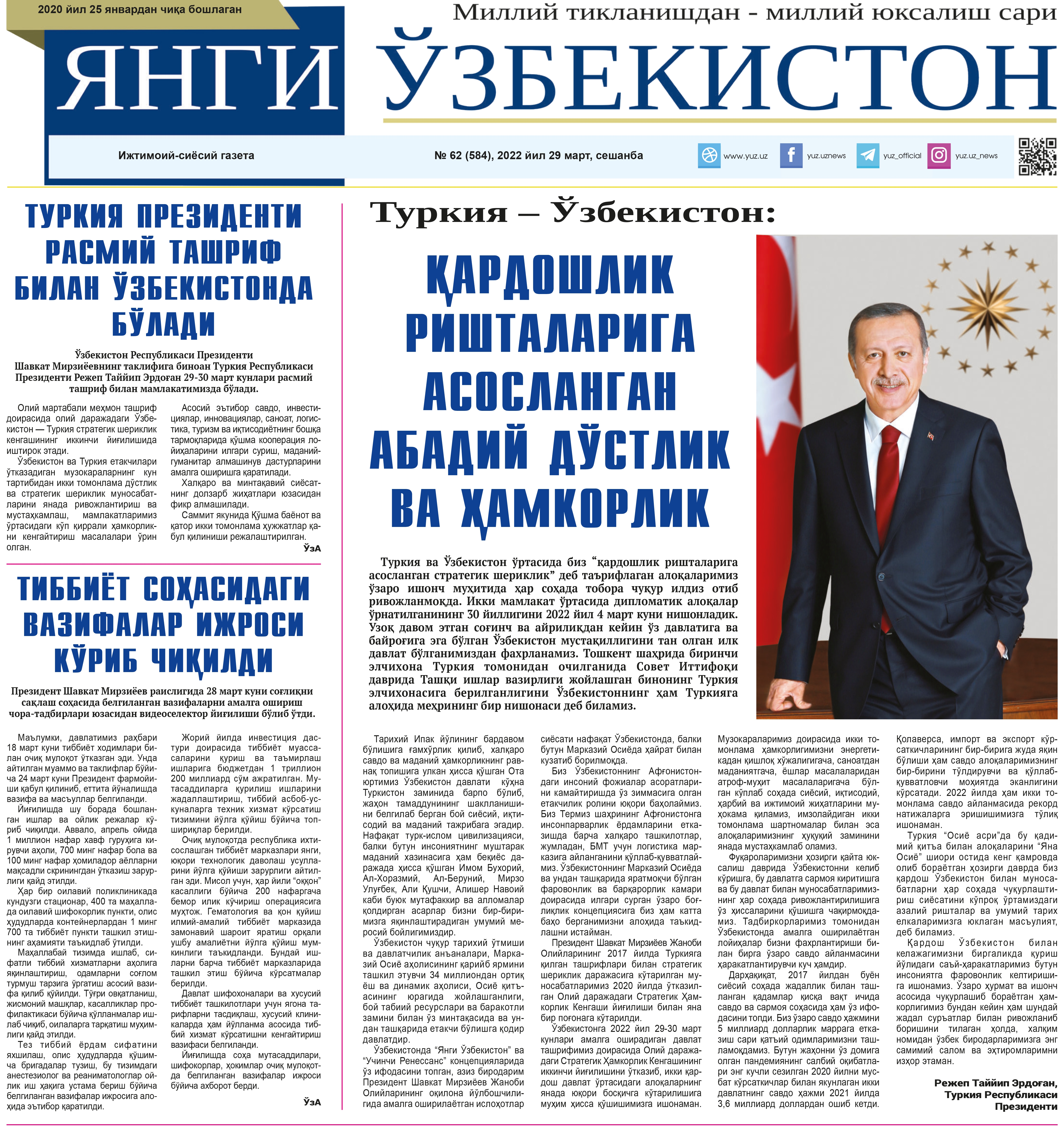