President Erdoğan: “We have demonstrated our solidarity with the Turkish Cypriots and our support for the TRNC at the highest level, and we will continue to do so”

President Erdoğan: “We have demonstrated our solidarity with the Turkish Cypriots and our support for the TRNC at the highest level, and we will continue to do so”

President Recep Tayyip Erdoğan said, "We have demonstrated our solidarity with the Turkish Cypriots and our support for the TRNC at the highest level, and we will continue to do so."

En route to Türkiye following his visit to the Turkish Republic of Northern Cyprus (TRNC), President Erdoğan responded to questions from journalists on the plane.

Recalling they were at the Turkish Republic of Northern Cyprus on the 47th anniversary of the Cyprus Peace Operation, President Erdoğan said: "I wish that the inaugurations we held here on the first day of Eid al-Adha will instil a new excitement, new love to the people of Northern Cyprus. The Northern Cyprus of 20 years ago and the Northern Cyprus of today have changed beyond comparison and developed with its infrastructure and superstructure. Praise be to Allah that we accomplished all these. The governments that came before us, unfortunately, did not achieve them, and they did not have such concerns, but we did."

Stating that their concerns were the same both on Cyprus and in Türkiye and they acted accordingly, President Erdoğan continued:

"Of course, some obstacles have always been created for us here. Because of these obstacles, steps that should have been taken here have been delayed. Imagine, there was a Northern Cyprus that had to put up with thirst. Now we bring water from Türkiye here under the sea. We challenge the South and say, 'We can give you water from here if you want. We will call it the Peace Spring. They could not want it. Currently, they still transport water from Greece to the South via tankers. We shared the spiritual atmosphere of the blessed Eid days with our Turkish Cypriot brothers and sisters, where feelings of unity, fraternity, and friendship prevailed. We have demonstrated our solidarity with the Turkish Cypriots and our support for the TRNC at the highest level, and we will continue to do so."

Expressing that they held meetings with TRNC President Ersin Tatar and they came together with Prime Minister Ersan Saner and ministers, President Erdoğan stated that the Cyprus issue, developments in the Eastern Mediterranean and steps to improve cooperation and solidarity between Türkiye and the Turkish Republic of Northern Cyprus were discussed in the meetings. Additionally, he noted that they held opening and promotion ceremonies for the projects that reflect the different dimensions of the cooperation.

President Erdoğan stated that the Maraş (Varosha) initiative was a peace project, and this matter should be viewed from this perspective. Underscoring that all the steps were taken transparently, on the basis of international law, President Erdoğan said,

"It is futile that this initiative, which will benefit both peoples on the Island, is used as a tool for black propaganda. We will continue to support the Turkish Cypriot authorities on this road that has been set out to eliminate the unjust treatment. I fully believe that the Turkish side is the only one that exerts efforts for peace and stability on the Island and in the region. The South has no such intention. Unfortunately, Greece did not demonstrate the same intention as the guarantor country. The United Kingdom did not demonstrate the same intention as the guarantor country, either. When we look at other countries, particularly the United States, they do not share these worries.  Today, it is likely that they were notified about our conversation, and they immediately arranged a meeting with all of Türkiye's adversaries under the leadership of Mitsotakis. Whoever does anything wherever they are, we will stand firmly against them."

President Erdoğan said, "The time has come for the talks to be conducted between two states, not two communities. Therefore, we are adamant that third parties do not intervene in the process, and we cannot accept it." He also indicated that they communicated it to relevant parties when necessary, and as the Turkish side, they turned a new leaf in the Cyprus issue without changing their constructive understanding.

Expressing that instead of being stuck with parameters that were proven not to provide a solution, they presented a fair, sustainable and realistic solution vision together with the Turkish Republic of Northern Cyprus, President Erdoğan continued as follows:

"Getting to the core of the issue, we also argue that first of all, the sovereign equality and equal status of the Turkish Cypriot people should be registered. A new negotiation process that will start without guaranteeing the acquired rights of the Turkish Cypriots is destined to fail. It is nothing more than a waste of time. We will continue to walk shoulder to shoulder, hand to hand in this struggle. The greatest strength of Türkiye and the Turkish Republic of Northern Cyprus comes from their unity, solidarity and fraternity. Those who attempt to undermine it will meet with failure both at home and abroad. This I am quite certain of."

President Erdoğan was reminded that during his speeches in the TRNC, he stated, "There is no longer a south or a north," and he was asked, "Does this process lead to the establishment of a Turkish Cypriot state?" President Erdoğan responded as follows:

"In fact, if you ask me how we have arrived here, as you know, we met with Mitsotakis in Brussels. In the meeting we had, I told him, "From now on, it makes no sense to have a third or fourth country between us. In other words, there is Greece and Türkiye. You have an advisor; I have an advisor. Let us only engage our advisors, allow them to negotiate between themselves, provide us with the outcomes, and then let us have our meeting and bring the issue to an end.' 'Do we agree?' 'Yes, we do.' 'Do we have a deal?' 'Yes, we do.'

Upon the question, "Do you see the possibility that the Greek Cypriot side will become a member of NATO as if it were the sole owner of the Island after its representation in the United Nations and the European Union? What will Türkiye's response be if this occurs?" President Erdoğan said, "It is impossible for Southern Cyprus to join NATO unless we provide a positive answer here, according to NATO's own treaty. They did it for Greece, but a similar scenario is currently out of the question. Because Türkiye's government is no longer the same as it was when Greece was admitted to NATO. We are now in charge. They can never, ever include Southern Cyprus in NATO now that we are here. They will not be able to bypass Türkiye here; hence it will not be possible for them to accept Southern Cyprus as a member."

The reporters also asked President Erdoğan whether he had a call specifically for the Greek Cypriots in this context, reminding him that property owners in Closed Varosha could apply to the Immovable Property Commission of Northern Cyprus. President Erdoğan answered, "At this point, our primary and most ideal call is that we wish our brothers and sisters in Northern Cyprus would apply for these properties, purchase them, and become their owners. There may even be people who come from Türkiye and end up buying property here. They may pave the way for these. There is not a single situation that will keep this from happening. In fact, it is claimed that Southern Cyprus does not appear to be so interested in these projects. The authorities here also say the same thing. The issue that we are currently focusing on is how to solve this problem within the confines of the law and without causing any trouble."

In response to the question, "What kind of measures were taken at Türkiye's own border?" after being reminded that Afghans formed huge lines to cross the Pakistan and Iran borders into other countries and that there was a mass migration from the country through human smuggling, President Erdoğan noted the following:

"We are now taking all necessary precautions, particularly in terms of security. No doubt, we are pushing the limits here. We have ongoing talks with Pakistan. There is also the issue of the Taliban. We continue our talks regarding them as well. Our Ministry of Foreign Affairs meets especially with senior Afghan officials to discuss these issues regarding the refugees. We want them to get involved and do what they need to do. 'Do not be a bystander on this subject; please hold onto your people.' we urge, and we continue our initiatives. We are in the midst of a heated campaign. Of course, the extent to which we can achieve results is another matter. Because the magnitude of the problem is enormous."

When asked if Türkiye will adopt a new policy in light of the fact that Libyan elections are scheduled for December, President Erdoğan stated that Türkiye's stance on the subject had always been to safeguard Libya's sovereignty, territorial integrity, and political unity.

Expressing that Türkiye was in Libya on an official invitation by the legitimate government recognised by the United Nations, President Erdoğan made the following assessment: "We stopped Libya from descending into a lengthy civil war with both our diplomatic and military achievements. As a result, we paved the way for an UN-led political process. We will continue to work for Libya's peace and stability, as well as our Libyan brothers and sisters' welfare and tranquillity. Surely, it is vital for Libya to maintain its unity and solidarity in this critical period. We are keeping a close eye on what is going on in Libya."

"We are cracking down on them, and we will continue to do so"

Upon the question, "French President Emmanuel Macron met with a group linked with the YPG, the PKK's Syrian branch. The Ministry of Foreign Affairs also condemned it in a written statement. What are your thoughts on the matter?" President Erdoğan replied as follows:

"We have become accustomed to it. Macron wants to get along well with me and says, 'Let us not be so hard on each other anymore.' But on the other hand, a few days pass, and here they are taking steps hand in hand with such extensions of the PKK and YPG. Since they are in coalition forces together with the United States, they are passing from there to Syria, especially from Iraq, with an infiltration movement. By crossing to the Syrian side, they are giving serious support to the terrorists here. 'Look, you say one thing, but regrettably, you are sending weapons to the terrorist organisation in a real sense, both in Iraq and Syria,' we told the Americans at our last meeting. 'Because we are the ones that battle terrorism, we are aware of this. Because you are the ones in charge, you are also aware of this.' Their silence is deafening.

They assume that a country like Türkiye will be completely oblivious to all these. However, we know everything there is to know about them and are cracking down on them, and we will continue to do so." 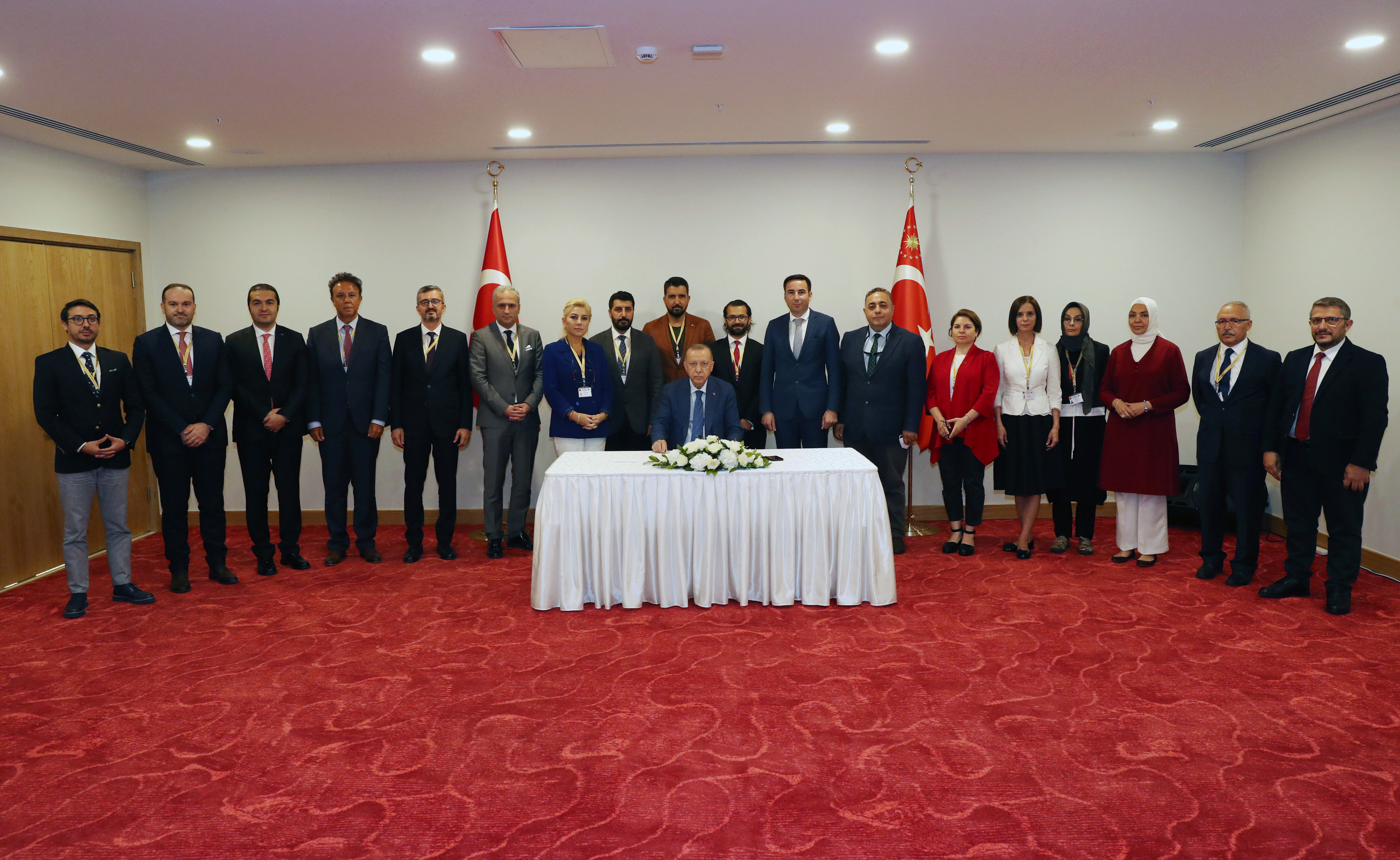