Directorate of Communications posts on “Sweden’s Application for NATO Membership”

Directorate of Communications posts on “Sweden’s Application for NATO Membership”

The Presidency's Directorate of Communications indicates that Türkiye expects concrete assurances from Sweden, which supports terrorist organisations, under the collective security principle of NATO.

The Directorate of Communications underlines that Türkiye has demanded the extradition of PKK/PYD and FETO terrorists from Sweden since 2017 but has yet to receive a positive response.

In the statement which calls attention to how the Swedish authorities receive members of the terrorist organisations Türkiye is fighting at the ministerial level and support their activities within the country, the necessity of the "termination of political support" is highlighted.

The statement emphasises the need to eliminate the source of terrorism financing and recounts how the Swedish government, which has applied for NATO membership, has announced its decision to provide $367 million in support of PKK/PYD, which threatens the national security of alliance member Türkiye, through 2023.

The importance of ceasing arms support for the PKK/PYD is noted in the statement, which reports that the Swedish government provided military equipment, particularly anti-tanks and drones, to the PKK/PYD, which NATO has designated as a terrorist organisation, and that these have been captured during counter-terrorism operations conducted by Turkish official authorities.

"The embargo is against the spirit of the alliance"

In the statement recalling that the Swedish government decided to impose an arms embargo against Türkiye after the Operation Peace Spring, which was launched in 2019 for Türkiye to exercise its rights stemming from international law in the Eastern Mediterranean and ensure border security, it is emphasised that Türkiye expects support from all NATO member states in its legitimate rights based on international law and in its fight against terrorism for decades and that the embargo practices are against the spirit of the alliance.

Pointing out the importance of global cooperation against terrorism, the statement reads:

"While our country adopts NATO's 'open-door' policy, it continues to believe that the alliance members and candidate countries should cooperate at a high level in combating terrorism, as they do in all other areas. Sweden, which has applied for membership, is expected to take principled steps and provide concrete assurances regarding Türkiye’s security concerns. Türkiye expects concrete assurances from Sweden, which supports terrorist organisations, under the collective security principle of NATO." 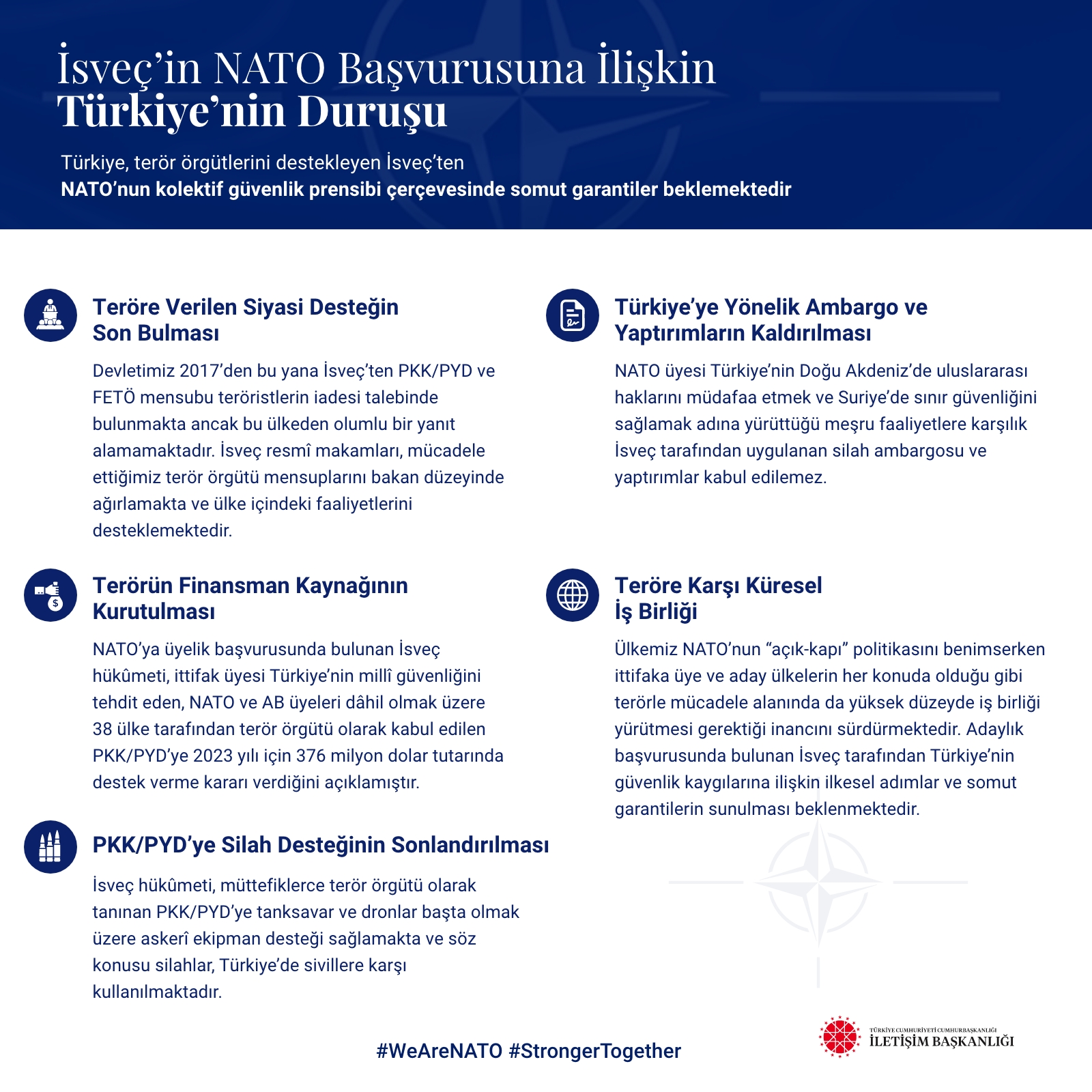